There’s this thing we (OK, not I) say when people are living with tragedy:  “God has big plans for you!”

I hope this doesn’t offend every reader I have, but seriously… what a stupid thing to say!  Just think about it for a minute.

You’re unemployed?  Oh, God has big plans for you!

You’re homeless?  God has big plans for you!

You can’t sell your home, and you need to?  God has big plans for you!

You’re dying?  God has big plans for you (but even if there actually is no plan, something great will come of this for someone else)!

Your spouse was unfaithful?  God has big plans for you!

Your aging parents need more and more care every day?  God has big plans for you!

You lost a child?  God has big plans for you! 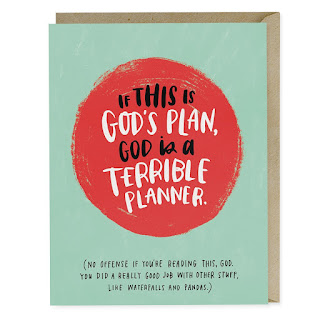 Now, I want to be honest.  “God has plans,” used to be my mantra!  There are certainly places in Scripture where we see this displayed or flat out proclaimed, Jeremiah 29:11 paramount among them:

“’For I know the plans I have for you,’ declares the Lord, ‘plans to prosper you and not to harm you, plans to give you hope and a future’” (NIV).

I’m not implying that God has no plan at all, but I think we’ve used this phrase (and this verse) incredibly irresponsibly, and I’m over it.

Isaiah 43:1-7 resonates very deeply, impregnated with hope yet grounded in reality.  My very brief paraphrase goes something like this:

Bad stuff is going to happen in your life, but God is with you, and God will gather God’s people in community… so hold on.

You could definitely read the passage for more insight.

If you’ve been following the daily office… or the lectionary… or even this blog… the story of Jacob has been prevalent for the past few weeks.  Jacob’s story is overrun by ‘bad things.’  Some of them are his own fault.  Some of them are the fault of others in his life.  Some of them seem to have come about simply because he exists.  But then there is this incredible moment when God renames him, and he is no longer Jacob, ‘the deceiver,’ but Israel, ‘the one who wrestles with God.’  That’s better, right?  Uh…

Here’s the good news.  God chooses as God’s own people the ones who wrestle.  I would venture to say that God’s plans are almost always (if not entirely) consumed by redemption within community.  So next time someone you know is hurting, you might consider what God’s plan is for you, as opposed to them.  Be present.  Be near.  Be together.  Be loving.  Be kind.  Be redemptive.  We are the plan.